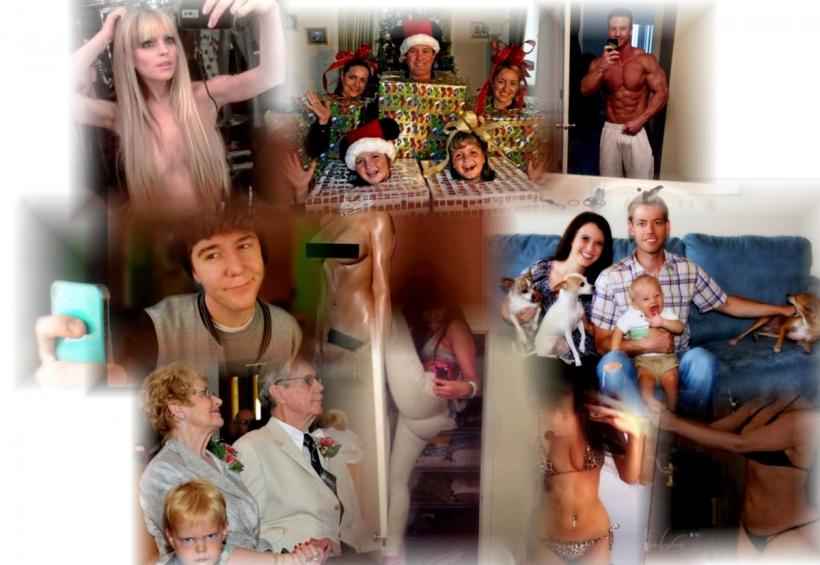 Although we now say, Different Strokes for Different folks, it was a Sly remix of Different Strokes by Different Folks, that brought it into the family. Regardless of the origin, coupled with the freedom of the Internet, it now takes on a whole new meaning, from simple Idiom to deviant idiot…mainly because we have too much time, are paid for doing nothing and have more ability at our fingertips.

Once upon a time, cable television and HBO brought previously unheard profanity and sex into our homes, if you had a scrambler; otherwise, you got static and strange shadows, which frankly might have been a good thing. Suddenly, visions of personal privacy were no long secret, and swearing like a sailor became the norm, in everything from cartoons to the daily news…then we really hooked up! Because clicking a power button, is more than a simple turn on. Live and in the flesh tone, the world presents itselfie, via standard pose, moving gif or video…welcome to the world wide weird!

Photographs once commemorating, or memorializing a moment in time, used to be taken when someone either didn’t want to be in the picture, or was more than happy to oblige, posing and giving their best or worst shot possible. Looking back on such relics of film art, there are tears and moments of laughter, since we know that is how we’ll most likely remember those certain someone’s. So, taking that for what it’s worth, how will our grand children explain Aunt Valerie’s Vulva?

Since human dignity and personal values long since jumped ship, leaving the brain to function on its own, we’ve allowed our growing knowledge of technology, along with boredom, due to lack of employment, education, imagination or desire, to fall victim to personal vanity and ego, with vile results. Children as young as six are sending off pictures in their underwear to friends, or worse…and anyone with a free right hand (awkward pause), can click off a sensual, sexual, scintillating and/or scandalous photo, unsuitable for an instant upload, and eternal mark on the highway of cyber communication. All because they need a like, or comment from the darkness of their room and soul. As a certain Church Lady would have said, “Isn’t that Special!”

When did waking up in the morning, wanting to have a great day, do a good job and love one another become a footnote? Telecommuting and lack of real employment and education in general, has given birth to a society of misguided individuals, that see breaking the Internet, with their private parts in a public post, better than a gold watch, and unpaid ticket to popularity. It is also highly doubtful, that they will ever see the stupidity of their actions, because after all everyone is doing it!

When X rated films hit the screen, the equivalent of what is now seen on cable or Youtube, I was a newly married twenty year-old, and went to see one with my husband and another couple, out of curiosity. The theater was old, because just like in Vaudeville, when an act plays Burlesque it’s finished. No one was looking at each other either, as we picked up popcorn, and purchased overpriced tickets of $8 (a regular film back then was $1.75.) Before the film even started, I learned embarrassment also had a price, and the fact that I actually ate the popcorn, freaks me out still today.

Nevertheless, we peeked into the filmed bedroom, and watched as others did it, with reckless abandonment, in every orifice, and with devices never intended for personal use. There was also strange background music, which later triggered a gag reflex, every time I was in an elevator with musac (Google it.) I can say now, as I did that night, it was not entertainment. I also remember how none of us talked on the ride home, except when the guys laughed hysterically at some of the aerobatic poses, and areola exposures. Maybe it was because I took my values along with my curiosity, and they were mortified. Be that as it may, it took years to forget that evening, and the salad dressing used in Barbara Broadcast.

These instant, mini electronic posters for adulthood, which young minds view, and copy, send a very wrong message. I don’t know about you, but Uncle Sam saying, I Want You, had nothing to do with a pair of naked breasts, or an erect penis at attention. War efforts may have a political bend, and not something everyone agrees upon, but right now the war is at home, and like it or not, we can’t afford to butt out or turn the other cheek.

The naked truth, which needs to be face-timed, is that we are creating a generation of children that believe it is acceptable to show and tell, as well as reach out and touch, what should be private and personal. Eventually, without the proper foundation and direction, they will also end up paying the price for their lights, camera and unsupervised, but emulated actions, and we will have no one to blame but our selfies.