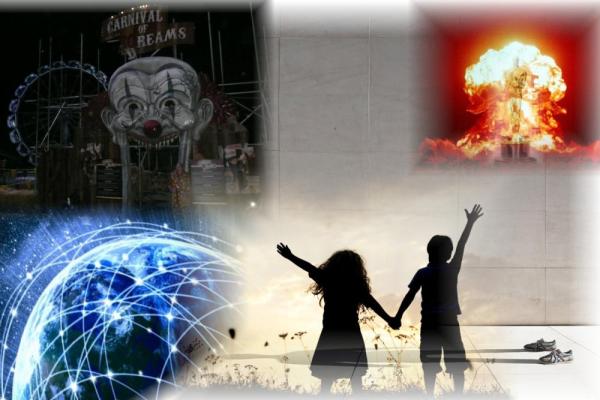 Acronymically speaking, there were a couple camps you could have joined in 2014 and been left breathless. Both were a circus of sorts, showing the freak show we call life. One was American Horror Story, and the other, an odd assortment of freakish charity, wherein normal people soaked themselves in ice-water for 10 seconds of video fame, giving unproven donations to the ALS Foundation. Regardless which, if either you participated in, they both left you unbalanced.

Nevertheless, unbalanced or not, we eventually returned to the reality of our lives already in progress around us, and went on with our day to day existence, with not so much as a blip in the radar, sliding towards 2015. That was of course until a group of hackers did blip some radar, exposing serious vulnerability in the invisible infrastructure and foundation we all depend upon. Let’s face it, circus or not, if the Internet tents come down how many of us really could progress through a daily reality?

It was, however, ironic that even though we had been faced with a massive breach in American security, discounting of course the millions of credit card numbers, medical files, passwords and accounts which had already been stolen and reported over the past couple of years, this time people finally got upset, because this was Hollywood…and by God that was wrong! Really?

War of the Worlds could not have dreamed a better opening day campaign than the one The Interview received, which appeared to be all the majority of the Twittering populous was concerned about. Unfortunately, the real 800 pound gorilla in the concession stand waiting for an Oscar and not a wiener was far more than the rude and unnecessary slap to the face of a foreign government. Simply put, if a major corporation could  effectively be taken down and secrets exposed for the sake of a 112 minute badly thought out Three Stooges routine, what could be done to the real world?

Looking back at all those people happily making fools of themselves with ice water and clever twists on a theme, it was recorded over 2.4 million moments of look at me were carried across our invisible network of tubes and exits (thank you Senator Ted Stevens – circa Youtube 2006*.) However, how many people actually voiced a terroristic themed, George Orwell alarm over the Sony hack? Frankly, THAT is a freaky showing of where our priorities in this world are falling…along with a bunch of ice.

If this nonchalant Scarlett O’Hara behavior wasn’t enough, because after all it did happen over the holidays…then maybe someone can explain why, in light of real and deadly terrorist action on the foreign soil of an ally, we publicly and politically snub the chance to show solidarity, only later sending a beloved folk singer to serenade the government, with a cabinet appointee…seriously? People died…a demonic statement was made, and all we could do was kiss a cheek and say “you’ve got a friend” after the fact? What were the powers that be thinking in such a non-scripted moment of WTF!

Having been raised in a time when security wasn’t an issue but a way of life, it scares me to see it being taken for granted and ignored, by a world turning more Morlock and Lemming than Jack Armstrong All American Boy. Just how long can we ignore the obvious…we are only human and sticks and stones do still break bones. Just because we live and work in an invisible world of dots and dashes doesn’t mean we are any less vulnerable, and don’t need solid allies and personal protection. What happens the day we wake up to a disconnected power silence, unable to log on and join a world no longer in progress?

It’s fun to enjoy entertainment and a blessing to offer our personal opinion, rights not offered in most countries. However, it is also our responsibility to be aware of everything a foot in our world and how it could, and very well will affect us at some point. Just because our professional and environmental footprints aren’t as visible as they once were doesn’t mean they aren’t every bit as deep, and as everyone knows…those that walk do inevitably fall, and if communication can’t get back up 911 is history.