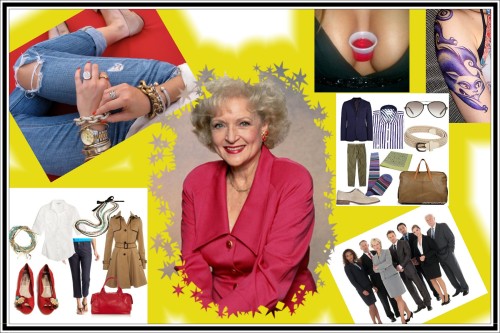 In 1992, my youngest daughter brought home her class picture. She was smiling with a bow in her hair, dressed for the rite of passage and captured moment in time shot, which she would someday show her own daughter and cringe. However, it was her teacher that made me cringe – or I should say her baggy jogging suit. Seriously?

This was also about the time casual Friday became a new national workplace institution, allowing everyone to let their hair down, along with their common sense and professionalism. At the time it appeared to be only a small amount of air escaping from an over inflated balloon, which the business world had blown out of proportion. The days of family business had disappeared and corporations, Wall Street, high finance and soon to be insider trading had taken over and we needed some breathing room.

Well we got it – and now the bellies doing the breathing need to go back into hiding.

When I grew up it was during the last hold before female placement in society, you see girls were not allowed to wear pants to school unless it was a coordinated pants suit. The day I went to high school wearing blue jeans was an epiphany for me, but one I took at face value, still getting up in the morning after cracking open my L’Egg of pantyhose, with slip, dress and heels in place. I should have known times were changing when that driver’s education teacher stalked me in the halls, certain I was a teacher in a the sea of denim and jersey clad students I stood out from. Possibly, it was also because along with taking my appearance seriously, I took my studies the same way and graduated as an honor student.

You may not be able to judge a book by its cover, and I know that better than most. However, in the professional world when you are expecting medical or legal care do we really need to know you have a nipple ring, prefer black eye liner to sunglasses or have a tattoo, which would have been censored ten years ago?  Looking into the eyes of people that have what you hope are your best interests at heart, it is hard not to panic when their medical ID has a Disney Princess pasted over their face, or there is an IPOD cranking out music excited to have their whistle blown. Really? No wonder the world loves Betty White.

Seriously, Betty White! I think she is one of the last members from my planet, a galaxy  far far away where you wanted to be taken seriously and your appearance was the first step in that direction. Professionals studied and received degrees, wanting that intelligence to be factored in with their bills for services rendered, leaving a good taste in your mouth, as well as a referral on your lips.  No, we don’t need to go back to saddle shoes and skirts, skinny ties and a cocktail at 5pm to be taken seriously. However, we do need to think before walking out the door and seeing if what we have on is just as acceptable to take out the trash, wash the dog or go to a bar and enjoy belly shots. You may not be able to judge a book by its cover, but you sure as heck can decide if the preview is worth your time or your dime. Indeed dear Betty, you girl are the golden rule no one measures up to anymore!

The world has become a computer generated platform where we only go out when there is no other choice, because email can only do so much.  However, rent needs to be paid, employees need to be paid and along with all the other costs of running a profession there is a due date, and those are never casual. They are instead black and white with no wiggle room – unlike the sweats, low-rider’s and midriff tops that rule the office. We wonder why our children take nothing serious, why we are failing behind every other country in the world, and why pay it forward is a reason to post on the internet, and not the normal behavior of a society with decency, common sense and pride – look in the mirror!

If you are a business owner or a professional stand back and look at your office and at yourself just once this week. Would you want your hair done by a hairdresser with foil and bleach in her hair as she cuts yours, laughing about a date she had that went too far or why her five year old thinks she is sexy? Would you want your bill settled by a receptionist more concerned about her belly button ring and new cell phone to get your name right or repeat the same information several times, obvious that her personal life is getting in the way of the details you are paying her for? Or how about medical care from someone who resembles someone needing to get back to that infamous garden in ripped jeans and a low cut or braless top?

You get what you give is very sage advice, that unlike the backside of a recent pair of jeans that gave me legal advice, never wears out. So why have we casually allowed ourselves to sit back and become so accepting to the lack of service, lack of presentation and self esteem in a world that is driven to get every dollar we have?

Oh, Todd and Lisa how I laughed in the 70’s at your SNL skit, with the plumber and the “Norge,” in fact in the world then it cracked me up! But who knew how quickly it would all go downstream, seriously needing a plunger to retrieve what shred of dignity society has left before it all goes down the drain for good.