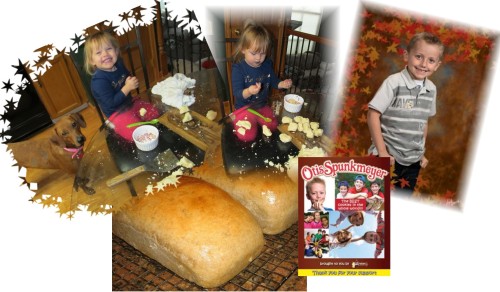 For all of the hours and hours parents are away from their children, and the stimulation of planned activities insuring close bonding,  generations of children are just not raised right.  Don’t get me wrong, I really believe the majority of parents out there are doing the best they can with what they have, it’s just what they have  isn’t always what a family kneads.

Growing up in the 60’s and 70’s, the best place to feel  love and hear laughter the kitchen.  Mom always had something baking, or coming out of the oven, and more often than not it was golden crusted loaves of bread.  No one needed anti-anxiety drugs or pain killers back then, we just hoped to get the first hot steaming piece, which would be covered in butter or jam, and we reached nirvana!  Mom would be proud of her efforts, loving us through and through, a conversation usually came along while we ate, or if not we just felt  love and were completed. Indeed, home was where the hearth was.

Now though bread is fast frozen, ready to toss in a pan and bake, along with everything else we have made into a shortcut or excuse. Nevertheless,  I still bake in my humble kitchen of almost 30 years, and even though I am alone that steaming first slice still reminds me of my life, and everything good I have and have had.

What we knead  the most, doesn’t come from half-baked get rich schemes or  greasing wheels on plans we know will never pan out. The best bread that can come into a home is not from a salary, it is from the honest care, love and hope that used to be a standard, along with the prayers we said before all bread was broken and thanks was given.

Recently, my young grandson was selling cookie dough for his church school, his first walk down the entrepreneurial path, making a difference in life through a bucket of unbaked cookies.  Of course I purchased one, hoping that on a day when the leaves were falling, and the air chilled, we will warm the house with the scents and sentiments, as  a few of those cookies crisped up in the oven, waiting to sizzle into a glass of cold milk. I hope he will remember when we do, remember  it was not just dough that made his school budget, instead it also rolled out a memory for us, sprinkled with sugar and love, along with his pride in not one but two jobs well done.

I always smile when I pass a restaurant and the smells invisibly grab at my stomach and nose. Most often, it is the rolls and bread people react to, maybe because it is the one part of life that has been given a backseat.  Fresh hot meals, made from love and by scratch from a time when a television channel was not dedicated to the effort, are missed.

My father used to say, you can’t butter me up so don’t try – and now I laugh. Indeed Dad, you were already a soft, warm loaf that had no need for butter to be won over.  Neither did my life, even if there was crust, and a few raw places when I needed them the least, but found them the most.

As I age I have to smile at the song, You don’t bring me flowers, not just because I don’t believe in killing something for a gift, but because the real love and connection should be,  you don’t being me flour anymore.

Last night, my granddaughter was over, thrilled she was finally making the cookies she had obsessed over all week – and at 2 ½ that is a lot of obsessing!  One look is all it took – the smile on her face, regardless of the spilled ingredients, or if she will ever remember the cookies in a week from now.  In that moment she was loved and happy.   She was also in my kitchen.

Sometimes the best rooms we have reserved for us, aren’t the living rooms or the family rooms, but instead the  loving room, where conversations and meals are made, memories are found and created, and bodies are nourished with more than food.  But then again, after all  I am what they call the sandwich generation – guess I just take it a little more seriously.  I value both sides that have been buttered, never loafing when I have the chance to love, and always praying nothing ends up crummy.