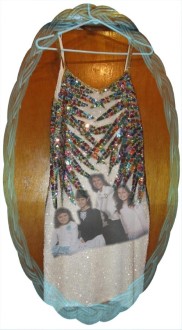 There are just some things in life that are what they are.  Like the first day of school, Prom, Trick or Treating and New Years Eve.  Ironic really, if we look at them on the surface, they  are actually interchangeable –an exciting moment, with achievements in costume, make-up and special effects.  The one thing that isn’t interchangeable however is when they exist in our life – after a certain period of time, we graduate to the next achievement, and it’s never the same.  That explains why there is a hanger in my closet, with a gorgeous little white dress covered in bright colored sequins and hanging beads that has never been worn, keeping it company the past  24 years.  Bought for a New Years Eve party, that never happened.

I never got to my Prom, and since Halloween grew into a lifestyle choice for me, that left the grown up moment, overly romanticized by the media known as New Years Eve.  I always wondered what it would be like dressed up like a shining star with someone I loved, holding up a crystal flute of champagne, as the clock struck twelve.  That was after all, why I bought the dress at 28, ready to make it happen – unfortunately, it never did.  By 25 I had already been blessed with three beautiful daughters, who celebrated New Years Eve with me, confetti and sparkling cider watching the ball drop, if they lasted that long.  My husband always made the choice to work, as a policeman a guaranteed night for activity.  The year I bought the dress, proud of being a beautiful leggy size 9, after three children, I was sure it would happen and I could be Cinderella.  Unfortunately, he went to a party alone after he got off work  since as he told me, it would be too late to get a sitter. The next year was too late for our marriage.

Years later, as my daughters grew into young women, I wondered if they would get a chance to wear the glass slipper dress and toast the hour.  Alas, one was a tomboy and laughed, the other not interested in sparkles and the last was perfectly grounded in her soul, not interested in a self centered moment.  So the dress still hangs, as beautiful as the day I bought it, wondering if it will ever get a chance to dominate and dazzle a room of laughing voices, approaching 30 years on the hanger.

Looking back on the fleeting romance and ego enhancement I have had, and what the media has thrown at me, I think about some other sparkles, only these are red, and on a pair of shoes clicking to go back home.  In Oz, Dorothy learned if she was ever looking for her heart’s desire, she only had to look as far as where she stood, because she never really lost it.  I think of the sparkle and laughter in the eyes of my daughters over the years, when the four of us  celebrated New Years over cheese dip and chips, hugging with love at the night’s end – even if it was 9 pm instead of Midnight.  We wore pajamas, except on one occasion, when I dressed them in evening gowns and make-up and they felt like movie stars.  The attire wasn’t important though, being together was what brought in the New Year, and they looked up at me then, making me the center of attention in the room.

So as I look at my dress now, with the golden straps and flirty beaded skirt, I know it reminds me of all I have had in my years, and not the slap and tickle promise of what might have been, as it was once intended.  Funny, how we remember Cinderella at the ball the most, but it was after midnight when reality came home, taking her back to where she belonged.  The goodness and purity of her heart was what changed her direction for all those years that followed.  Looking at my daughters through those years, with their goodness, love, hope and promise, they were the New Year for me, time and time again, and like the lyrics of a song remind me, how long will I love you?   Until the 12th of Never and that’s a long long time.  I guess just like my dress, we need to hang around longer to understand that the best parts of life don’t always sparkle the way we expect them to or make us the center of attention, and most certain of all, life isn’t ever what it seams to be in the beginning.