There are lots of self help books and articles assuring women all we ever need to know in life, we learned before the 6th grade.  In a nutshell, they are correct.  However, they neglect to mention the best teacher is 12” of structurally seductive pink and perfect Barbie (and this IS the version wearing panties.)

I wonder when Ruth Handler dreamed up her lifetime of pastel annuity payments with a bubble cut, if it was more than just an answer to paper dolls that would last.  As a one time Barbie girl and later Barbie Collector (one shoe short from being on “Hoarders”) I knew the value of Miss B. early in my life.  However, before I could pass it along to my daughters, they showed me how it was learned by female osmosis.

You see there are only a handful of women you will ever meet in life (similar to that literary group of 5 in heaven).  These women will change in appearance, ability and attitude (the 3 A’s), just like Barbie herself.  The key is realizing that the plastic is the same and it never changes.  We call this core value; Mattel would call it an industrial secret.  The bottom line is the plastic is fake and so are the 3 A’s, and if you recognize it early you are already ahead in life and have a good chance of making it out happy and undamaged.

When I was going through an ugly time in my first marriage, I went out of state to visit family.  As I sat at the breakfast table, my sister began to ask personal questions she apparently already knew the answer to which freaked my twenty something brain out.  Cheshired, she explained while my 2 young daughters bathed the night before, between the bubbles and the Barbie’s there were baubles of babble.  Barbie was upset because her marriage was over and she was crying because Ken had a girlfriend and she hated her job and cried all the time.  Yes from the mouths of babes through the Babs.

Laughing over that mint in box intervention, my sister and I found the moment priceless.  Later as the girls grew I shared the memory and also so much more.  I asked them to show me the Barbie’s they played with the most and tell me “who” they were.  What they gave me was:

Now, the real kicker here was there was only one Ken, he married one of the girls and the rest did just fine without a man.  My guess is this was my single influence at the time and frankly, common sense I still stand behind JMHO (screw Calgon, Will and Grace take me away).

I told the girls in a very sincere and honest talk , when they advanced to grade school and beyond, these five “names or barbies” would apply to all the girls they would ever meet, every day of their life until they were dead and buried.  Never truer words were spoken.

As most police shows will inform you, “names have been changed to protect the innocent.”  What they fail to say is there are no innocent’s growing up female and only prisoners are taken.  How wonderful it would be if the logic of Barbie could be put in a pink box and sent home with every NRFB newborn little girl.  Think of the pain she would be saved from in life knowing all she had to do was look for one of those five dolls in her life and avoid the actions, lies, back stabbing, betrayal and revenge that comes with them.  I have often thought of going through the Bible to see if “Karen,” “Theresa,” “Pam,” “Carolyn,” and “Kim” had roots there as well or if they were just curvaceous idols of our era.

As my girls became adult women and entered the working arena, the knowledge of Barbie never left them.  Two of them who have been beaten down emotionally more than the other, have remarked many times, “When do these women ever stop?”  I totally understand having been at more than one XX chromosome mercy match.  I also find it no coincidence, but a sign from God warning us that females are a double X for a reason, and that is not for X marks the spot but XX you have been canceled out.  Indeed the female doesn’t just eat her young; she devours her own kind and smiles in stiletto heels holding a Coach bag dripping in blood.

Mattel may have thought they just made a plastic novelty that became a dream icon to millions of little girls for over 50 years, but in truth, they offered a predetermined Pandora’s Box , that only comes to light, after the teenage and adult damage has been done.  I guess the best we can ever hope for is that we are the nice girl with the pet, who occasionally dreams of being the bad or sexy famous girl and once in a while there is a small financial break affording us the ability to spoil our children and grandchildren, and maybe even ourselves when no one is looking.

Look at the yearbook a little closer over coffee tomorrow, think of your school and working career and even your own family.  Sort  out your groups of five at a time, and give yourself credit if you have survived with little or minimal damage. However, keep in mind YOU are one of someone else’s 5, so how well did you do? 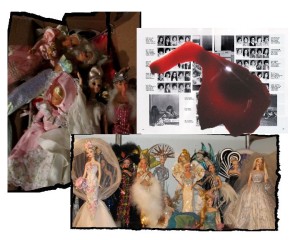