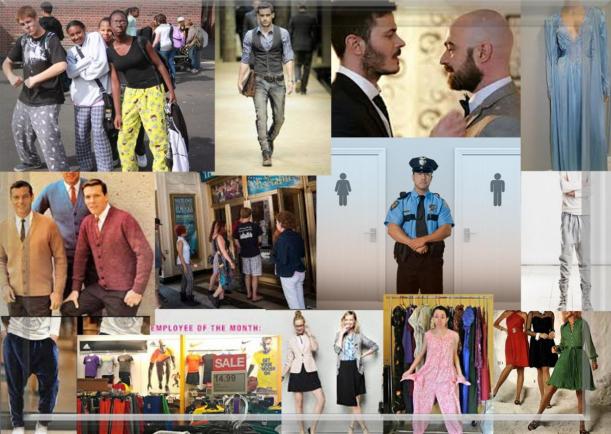 Time and time again, I find myself going back to the past, where peace of mind waits, next to a daily newspaper, a ringing rotary phone no one is answering, and my father sitting in his chair, wearing a shirt and pants, with black socks and shoes. It is also a Saturday. You may wonder why such a memory continually drags me back, but I know, and it is because all of it is gone…never to be again, and I realize the impact.

Growing up, before we left the house, we used to dress. By that, I mean we cared how we looked. If you were flying off in a plane, going to the office, heading to school, or just shopping for an afternoon, overall appearance was important! Check out catalogs and ads before 1990 and you get my drift. Once upon a time, we cared how we presented ourselves to other people, and how we were viewed was important, and it didn’t stop there.

Coming home to be with your family in the evening, odds were you might have removed your shoes for slippers, but in general, you stayed in the outfit of the day, shared time and a meal together, and often watched television or played cards, sometimes with neighbors. I guess you could say, that life appeared to matter at lot more (unless you are a gay man…and well, I’m getting to that…sort of).

Never did you go for a job interview, an appointment…even the dentist, or to school, looking as if you could clean out a garage, or had just rolled out of bed. Likewise, going to bed, there were pajamas for the men, long pants in the winter and short in the summer, and oh, the nightgowns and peignoir sets women could choose from. However, no matter how beautiful they were, with lace and sheer fabric, if she was needed to leave her room, a practical robe was always waiting. You see, some things no matter how beautiful, still remained personal and private (what a concept!)

We also addressed the issues of life, corrected mistakes, took responsibility for our wrongs, and did everything possible to make the world a better place to live. Our attitudes, although occasionally misguided, which happens in a melting pot of society, still had family at the core, with love and compassion wrapped tightly around, all dressed respectively in a protective shell. However, as time passed, just like any other jaw breaker, the nuclear family saw everything sucked away, until all that remained, were shreds of family, and a lot of opinion and attitude. Personally, I don’t think anyone saw what was coming…at least they didn’t dress for it.

Forgetting a time when television and movies had a moral code, musicians couldn’t swivel their hips, and cleavage was found in a different rock formation, we started to let our hair down. After freedom was given to love, the press and our will, sweat pants and jeans gave free reign to loose flesh and tight opinions. We no longer cared what we looked like, as long as it was comfortable, and cared even less what people thought of us. However, we did care to address the faults of others, more vocal than ever before.

When the appearance of society shifted to grunge, our personal outlook also lost shape. Greed and opinions made laws, fought wars, and broke promises, while political and legal leaders also stopped being role models, becoming nothing more than fodder for reality television, something Cronkite once honored as the news. As long as we’re all comfortable, like cheap micro fleece Sponge Bob pants, and gray sweatshirts who cares about tomorrow.

Along with the advance of technology, we also work from home, another reason not to dress for impress or swim with the sharks. We can have a pile of nachos and a soda on the desk, as we tap on a keyboard for $15 and hour, while alternating between eBay and Facebook, offering troll behavior and opinions anonymously as we feel like a somebody. Even a trip to the bank is gone, since direct deposit is a given, just like the calories those nachos will eventually deliver to our ass. However, what does any of it matter…we’re comfortable!

In order to address all that is wrong with the world anymore, we have to first look at ourselves, in a true reflection of what not caring has allowed to happen. Because if we don’t start, and accept some inconvenience, and uncomfortable moments needed to make the effort, the foundation for society will continue to crumble, just like the cake, which we probably stood over the sink eating for breakfast. We can’t expect change if we don’t start with ourselves, and in a world of a few billion people, that’s a lot of ourselves needing to listen.

I also find it pathetic, in a country teetering on political chaos, that we prioritize half-naked women on a daily basis. We’ve made them famous for over sized lips and butts, and of all things, are envious over the way they dress, in thousand dollar outfits with purses, costing as much as a car. There is no logic or wisdom to such behavior, especially when we refuse to tolerate a normal person, taking great pains to look nice, who just wants to be accepted for the gender they associate with, and use a damn bathroom!

Maybe it really is that simple. We give a shit for what we can address personally, feel comfortable in and know will never directly affect us. However, what we should be giving a shit about, is the country, the complete breakdown of society, humanity, and personal rights, all of which we’ve flushed down the toilet, after pulling up baggy sweats, on the way to a television set or laptop computer.

Dress for success isn’t an ancient slogan, and addressing the facts isn’t a onetime threat. They are both a way of life, which if we don’t wake up and remember, will have us struggling to survive in a country that has become too comfortable at doing nothing, forgetting how to break out a sweat and suit up when the time comes.