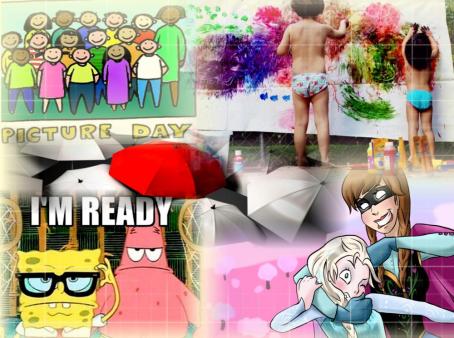 I have had the honor of raising three daughters through school, and now watch as grandchildren climb the same step stool and ladder towards knowledge and success. The highlight for their efforts is seeing a class photo each year. Albeit way over priced monetarily, they are priceless in the hearts of those who posed, and those who receive.

We’ve all been there. It is the morning of school pictures, and you either have crappy hair, a zit, totally forgot and have nothing to wear, or you’ve been up for hours as if it was a Vogue cover shoot along the canals of Venice. Regardless what your take is, or was, on that memorable day, what developed after the film was processed would follow or haunt you forever, and become an icon to your youth on Ancestry.com. That being said, it also is a moneymaker of epic proportions, and in most states a well-held account by a company called Lifetouch.

Don’t get me wrong, I appreciate a small business that has grown over the years, and hired only a few reported and/or investigated criminals, such as those noted by the FBI in Rochester, NY. However, when anyone in business has such an untouchable hold on something, things always fall through the cracks. In case you don’t believe me, see what happens when you try to hold sand too tight in your fist….get the picture? These may be the days of our lives, but they are dictated by a precious few, and if you take a look at the recurring complaints they rack up, their pictures speak more than a thousand ill words.

In our family, one  particular noteworthy shot is my older sister with her bangs held back in pin curls (consult Google or Betty Boop). In her haste to get her daughters to school, Mom overlooked the embarrassing and the obvious. There are also a couple I personally shudder at in junior high, with white yarn bows I knew looked great, stuck in at the last minute, and another, with the indentation from a leather cord, since I wanted to be a flower child, and needed to hide my accented attire outside the home. However, regardless of the toothless, hair flying crazy, those photos were who we were, and how we lived, and forever have a place in life….touched as they may have been.

So that being said, why does a single company hold the inspiration, imagination and decision for such moments? Over the years there have been many times when a photo was taken poorly, due only to the judgment of the photographer, and we were left without what we paid for, and usually no recourse, or occasionally the option for a retake. Regardless of the fix, the moment in time was gone, and when the pictures were eventually brought out, inevitably someone would say, that was the retake…OMG you should have seen the first one. Negative as they may be, dark comments forever remain in a family room.

This brings me to a granddaughter, anxious for her first school photo. Frozen was still all the rage (will it ever end?) and so, her short hair was put into a side braid, and in her heart she was Elsa the Winter Queen. However, did the Lifetouch photographer let it go? Oh Hell to the no! Instead, they positioned this sweet child with her hair pushed to the back, so it appeared she had been the victim of Edward Scissorhands on a good day, and not the beloved Princess of snow. They also decided on a background different that we had selected and paid for.

When pictures arrived, this little girl burst into tears, and said, I look like a BOY! Her spirit, memory and excitement were crushed. Lifetouch also refused to refund the ridiculous price that was paid, so we took a new photo ourselves, and placed it in her school memory book. You would think that was enough…but it wasn’t.

Today, this little girl was an official elementary delight, anxious to be with her friends and take their photos, which would also be in a yearbook (yes, don’t ask….again, Lifetouch$$$.) Bouncing down the stairs in all her creative and imaginary delight, trust me when I say she is a true original, she presented herself in a full piece panda suit, hood and ears outlining a face with missing teeth and bright eyes. Certain that was how she wanted to look; she left for school and pictures. Arriving home however, that delight was long gone.

It appears the photographer not only removed her from the panda suit, but according to very fine print on the offer all children were put in a cap and gown, which we had not asked for…it, is KINDERGARTEN NOT HIGH SCHOOL! There was also no reason to assume this would be done after they collected our money. Therefore, all the bows and headbands, special hair styles or memorable outfits were removed, hidden and lost forever, along with the memory of “Mom…that was my first school picture!”

There are only a few days in life that can never be recaptured, and that is why photography, from the days of tin type, to Kodacolor, and now digital remains a lifeblood for families. Who doesn’t want to remember catching her bouquet, or seeing a bouquet of blessings in a nursery, the first lost tooth or a football bruise worn in pride? Life touches us all, good and bad, and when it is saved for future generations, it is a gift, triggering memories and emotions, that die away with the person, leaving only a photo behind.

There is time enough, with individuality frowned upon, school uniforms issued and peer pressure demanding identical looks. However, when the cookies are still fresh from the oven, don’t we own them a chance to be sprinkled and sugared with the innocence and happiness that fades too fast? Companies that overstep their bounds in the arena of education, or a photographer, coach or teacher, need to be slapped with the nearest ruler, and read their rights, because they do not have the right to ruin a child’s laughter or dream! Just because they aren’t sexual, some touches are every bit as bad, and we trust these people to see our children to the end of their rainbows, where unicorns and pandas wait patiently for their day in the sun, where they will leave a lasting impression on our future adults.

There was a saying once, that you were old when you worried about the denigration of the youth. Now, however, it is the denigration of society and the entire human race, and worrying about it has long since grown old. Vogue Magazine, the timeless tome of advertising, style and impulse dreaming, was in the news today, with an exhibit, which confirms that flash for cash is no longer model behavior, leaving behind negative images, cluttering the stage of society. That being said, it also confirms there isn’t any social left in humanity, so along with your exhibition, please pen a new moniker for this world…the darkness where we co-exist.

Newspapers and magazines were the first tangible window of the world, bringing fashion, news, humor, spirituality, cartoons and advertising. Teething on these pages of once mighty trees, was a rite of passage, which gave us the option to share life with one another, offer an opinion or quote a fact. I am proud to have known it, because it is where my mind learned, and yearned for more. However, as that desire grew, so did curiosity, and soon Pandora’s Box was laid open, against waves of invisible communication, offering more than ever dreamed possible.

That being said, knowledge is not rude voyeurism, which is what now corrupts our minds, hearts and souls. Why is it news to know the intimate deals of strangers or celebrities? Watch boils and cysts pop open, spewing yellow and green pus against blood stained gauze, or hear heart wrenching details, as someone dies or an animal is killed? Likewise, underwear is just that…something worn under…and in private,  not something for public commentary! Nothing is sacred anymore, personal or sentimental…because if it will get a response on social media, it is posted, and all the more, if it could be liked or become viral…as well as vile. We don’t dream or live vicariously anymore, we live for quick attention, even if it is bad, or disgusting.

The society we have created, has fallen back to a Roman thumbs up or down with more lying than lions, as people tear down lives with hateful comments or jealous retorts. Everything is now offered for public critique, and there is no end in sight.  Bullies, advertising companies, media productions and our very children will continue this game of life to the end, as it gets darker and darker. People are hurt, some die and some  simply give up, all because of empty words and personal bravado, stepping in where it never belonged.

Lord of the Flies is no longer a book against a wall, but a reality, as we turn on one another just because we can, and know we will come out victorious with Instagram, Facebook, Snapchat and Twitter crowds of invisible applause and approval. I remember fears that Strawberry Fields would forever brainwash the youth, offering ideas of free love, pot and LSD, music and nonconforming lifestyles, sure to undermine the establishment. However, as someone from that same slice of American Pie, I saw more love for one another, compassion, and roots of family values than I ever saw hate, blood and destruction.

All lives mattered when I grew up, and we didn’t need to make it a statement, we just respected it and one another. Yes, there were times of political and racial unrest, but the foundation my home was on, was committed to caring, and with my open door, open heart and open mind, I didn’t need an open Wi-Fi- signal to share. Life, like everything else, only works when it is taken care of, allowed to find its own level, tended and nourished with honesty and love.

Maybe someday compassion, understanding and brotherhood will again be in vogue, and having pride and class won’t be something held up for comment, but will again define character in more than an exhibition. Then again, we’ve moved so far in the wrong direction, does anyone even care? What I do know, is that Somewhere over the Rainbow there are more than a few Grateful Dead, happy they are not living in the shadowed reality we’ve accepted, and taken for granted.